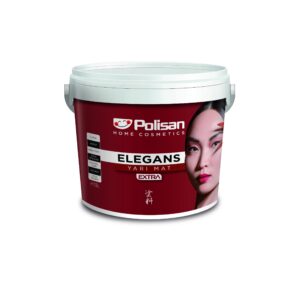 This is a water-based, silicon, wipeable, antibacterial, flexible and extra-covering semi-matte interior paint that prevents the growth of mold and fungi. Fungi and mold preventive, non-fading, stain and dust repellent, odorless silky matte paint with enhanced wiping characteristics. The water repelling and vapor permeability increasing ability of the paint’s silicon base and special resin content both increases the paint’s “wipeability” and prevents bubbling and peeling, especially in humid environments. The paint’s elasticity enables it to be applied on capillary surfaces with cracks without the need for filler. Prevents mold and fungi formation on the surfaces to which it is applied and the paint is environmentally friendly due to its low VOC value.

The Polisan brand is widely known in glue and paint sectors. The name is derived from polyvinyl acetate (PVA) glue and the word “sanayi” (Turkish for industry).

The founders of the company, the Bitlis family, started commercial operations in the 1920s as a merchandising firm until the establishment of a fabric painting and knitting business called Sark Mensucat. In 1964, they entered the chemicals industry with the foundation of Polisan Chemical, which produced emulsifier resins. In 1985, paint production had begun under the Polisan brand.

Polisan Kansai Boya’s most recent paint production and warehouse facility investment, which started in 2016 on 142,000 square meter land in the Gebze Chemicals Specialized Organized Industrial Zone, was completed in June 2018. Having started with a paint production capacity of 10,000 tons/year in 1985, Polisan Kansai Boya now has a capacity of 180,000 tons/year in 3 shifts at the former paint facility, which has now been relocated. Built to International Standards, the fully automated new facility has tripled the annual production capacity, rising it to 180,000 tons/year in a single shift. With the flexibility of working 3 shifts a day, without requiring additional investment spending, the annual production capacity of the new facility can rise to as high as 540,000 tons, which almost matches the size of Turkey’s total decorative market. The new facility was designed in order to receive a “Green Building Certificate” in an attempt to lead the transformation of the market in terms of sustainability and has become the 23rd production facility within Turkey to receive a LEED certification. This fully-automated facility is positioned as a regional production hub by Polisan’s Japanese partner Kansai Paint. Thereby, Polisan Kansai Boya is one step closer to its goal of becoming a global brand.