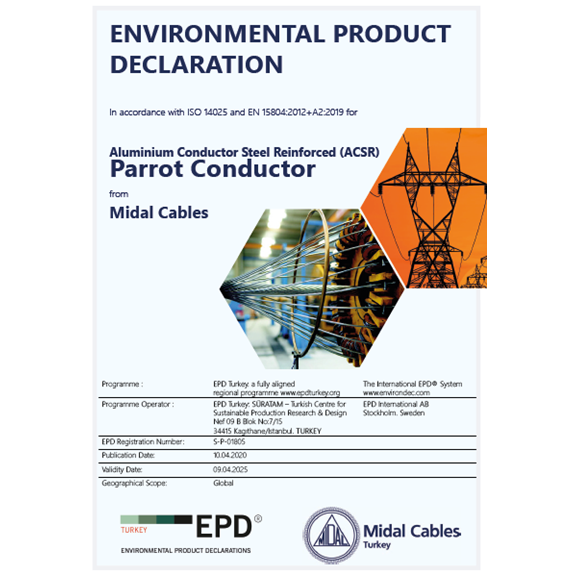 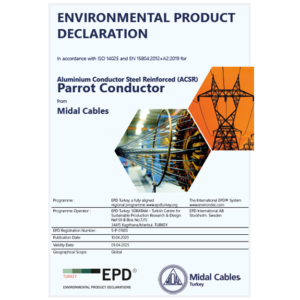 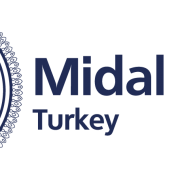 EPD document prepared for Midal Cable ACRS Parrot with registration number S-P-01805 has been registered and published in EPD Turkey and The International EPD System. Registered EPD document applies to all global markets.

Aluminium Conductor Steel Reinforced (ACSR) is concentrically stranded conductor with one or more layers of hard drawn 1350-H19 aluminium wire on galvanized steel wire core. The core can be single wire or stranded depending on the size. Steel core wire is available in Class A , B or Class C  alvanization for corrosion protection. Additional corrosion protection is available through the application of grease to the core or infusion of the completed conductor with grease. The proportion of steel and aluminium in an ACSR conductor can be selected based on the mechanical strength and current carrying capacity demanded by each application. ACSR conductors are recognized for their record of cost. dependability and favourable strength / weight ratio. ACSR conductors combine the light weight and good conductivity of aluminium with the high tensile strength and ruggedness of steel. In line design. This can provide higher tensions, less sag, and longer span lengths than obtainable with most other types of overhead conductors. Midal manufacture and supply ACSR on non-returnable wooden/steel reels or returnable steel reels depending on customer requirement.

Midal Kablo Sanayi ve Ticaret A.Ş. is established in 2011 in Turkey and started production by the 2nd Q of 2012 with investment from Midal Cables Group, by far the highest Aluminium Wire Rod and Aluminium Overhead line production capacity in the world. Midal Cables Group draws the attention with their single-product groups despite the fact that the Company has the highest aluminium processing capacity in the world for the production of energy products. Midal Kablo Sanayi ve Ticaret A.Ş. is the only production facility in Turkey on Aluminium Overhead Line production. Its production focus is on Aluminium Overhead lines and able to produce all kinds of Aluminium and Aluminium Derivatives Overhead Line conductor in all dimensions compliant to all standards. Midal Kablo Sanayi ve Ticaret A.Ş. has been exported to many countries around the world. With its sales performance in 2012 and 2013, it received “Technical Competence” accolade for exporting whole its production. The company started to serve the domestic market due to demand created by increasing energy investment after 2013. As a result, its share of the domestic market increased while continuing the export performance. As the company always ranked among top 1000 firms in export in Turkey compiled by Turkish Exporters Assembly (TIM) each year since its establishment in 2012. It also always ranked among the fi rst 25 exporter fi rms all the times in Iron and Non-Iron Metals Group Also including year 2017. It has been top exporter since and has always made the highest amount of export in its industry in the same period. Midal Kablo Sanayi ve Ticaret A.Ş. makes production at STM. CAN/CSA. DIN. NFC. IEC and BS EN standards and produces all the products involved in the relevant standards. The foreign market share of the Company is considerably high since it is “first choice” supplier in many countries primarily UK, Finland, Norway, Germany, Netherlands, Canada and Brazil. It is also leading the market share in Turkish domestic market.