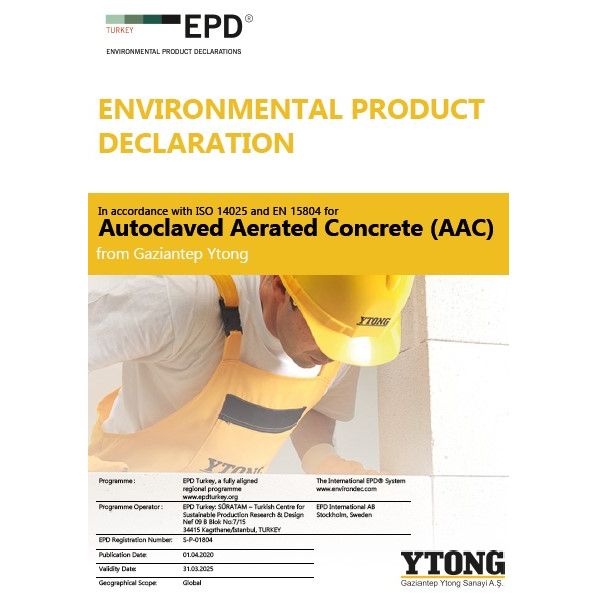 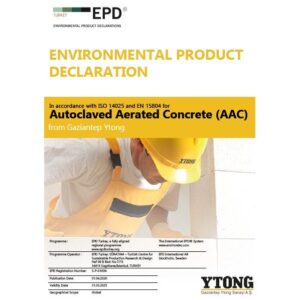 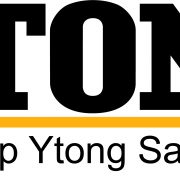 The products mentioned are unreinforced building blocks in various formats made of autoclaved aerated concrete /TS EN 771-4: 2011/. AAC belongs to the porous steam-cured light-weight concrete group. The ground quartzite is mixed with gypsum, cement, quicklime and recycled AAC materials (slurry and powder) that has been reduced to small pieces, adding water and aluminum powder, in a mixer, until it becomes a watery suspension. It is then poured into a casting mould. The aluminum reacts in an alkaline milieu. Thus, gaseous hydrogen is formed which creates pores in the mass and escapes without leaving any residue. The pores usually have a diameter 0.5- 1.5 mm and are filled exclusively with air. After setting once, semisolid raw blocks are created, from which the autoclaved aerated concrete building components are then cut with high precision. The formation of the final qualities of the building component occurs during the subsequent steam-curing over 5 to 12 hours at approximately 190˚ C with approximately 12 bar pressure in steam pressure kettles or autoclaves, as they are called. The used substances create calcium hydro silicates, which correspond to the naturally occurring mineral tobermorite. The reaction of the material is complete when removed from the autoclave. Therefore, the reaction does not take as long as the hardening of concrete. Once the steaming process is complete, the steam is used for other autoclave cycles. AAC blocks are then piled onto wooden pallets and shrink-wrapped in polyethylene wrap.

The company started the production in 1998 in Gaziantep, on 80.000 m2 area, 10.000 m2 of this covered. The production is made with the most advanced and unique  technology  in Gaziantep Ytong , one of the five plants of Ytong in Turkey.

The name of ytong is identified with the modern buildings, constructed by autoclaved aerated concrete blocks and known with constant and relaible image all over the World. Ytong brand   has the highest production capacity of autoclaved aerated gas concrete in the world totally in 21 countries and 77 plants, took part of best known brands of this century in October 2009 , in Germany.